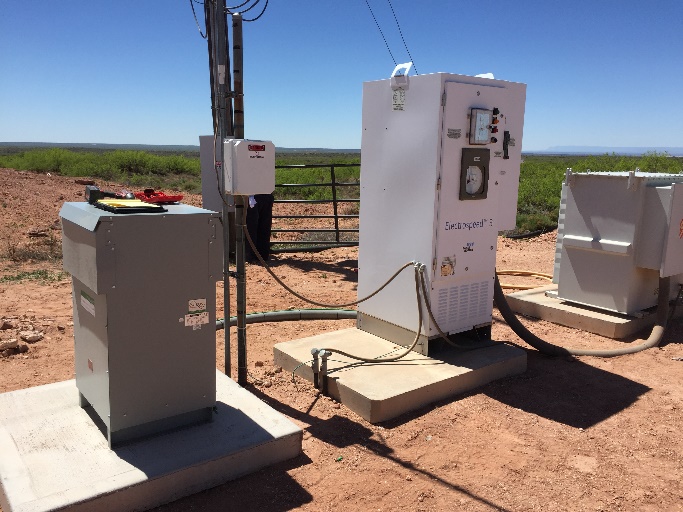 The intent of the testing protocol was to install a Mirus Lineator ED series Wide Spectrum Harmonic Filter on ESP applications within the OXY system.  The following discussion will be based on a 55 Hz output inverter frequency. Testing was done at 60 Hz, but we wanted to verify performance at less than 60 Hz, assuming that nominal loading is less than the 60 Hz frequency.

The background voltage distortion is moderate, i.e. just under 5% and well within the IEEE 519 Std for the voltage class. From the analysis we ran, there are no errant harmonics witnessed from the distribution system… a normal prominent 5th and secondary 7th harmonic pattern exists, well within specification.

Measurements taken at the service drop disconnect, IEEE 519‐2014 would allow for 8% Vthd, the filters at 55 Hz measured 4.03% ‐ 4.8%, meeting the Vthd requirements.  Also note that the measurements taken were still about the same as the background voltage distortion measurements recorded indicating there was no incremental voltage distortion gain to the overall distribution system from the current harmonic demand distortion. This indicates that there is no functional impact to the distribution grid form this sites incremental harmonic contribution.

During the testing, no errant measurements were discovered. The filter marginally exceeds the ITDD (Current Total Demand Distortion) performance requirement, but meets the individual harmonic requirements.  Prior to the testing, it was not known that the drives being used were Baker Hughes units configured in a 6‐step configuration. This drive configuration requires a slightly different ratio of impedance/inductance to capacitance to meet IEEE 519.  Mirus has a special Baker Hughes configuration filter designed for this configuration, referred to as the C20 design. It had also been assumed prior to this inspection and testing that the background voltage distortion would be in the same range as experienced in other fields where the Mirus filter had been deployed, i.e. Background Vd exceeding 8% to as high as 13%. The low background distortion tested would indicate that the ED version as previously supplied may not in fact be required. The C20 configuration (Baker Hughes compatible design) features a tapped inductor which allows the user to fine tune the performance to match their harmonic objectives. The impedance can be tapped to as high a 5% through impedance. The C20 then can provide the tapped inductor feature the customer indicated he may want, with the proper inductor/capacitance ratio required of a Baker Hughes design.  Future modeling results show that just using a C20 design, the projected harmonic is nicely cleaned up, 5.1% Vthd & 9.1% Ithd, with a .93 True Power Factor.